Strange But True: Twitter is the #1 Social Site for Salespeople

Founded in December 2002, LinkedIn now boasts more than 380 million users. The network gets 2 new members every second. That makes it the 3rd most popular social network in the world – right behind China’s Qzone and, of course, Facebook.

And don’t forget about the anecdotal evidence. Ask anyone the best social site for any professional, and it’s guaranteed they’ll say “LinkedIn.”

But, there’s actually evidence that it’s NOT the #1 social network for salespeople.

Bear with me here a second.

You can measure success by the sheer quantity of users.

But, in business language, that’s the wrong metric to track.

Wouldn’t you rather be on the social network proven most effective for salespeople?

Some Evidence that Supports Twitter’s Superiority to LinkedIn

Really, it comes from a credible source. Sales thought leaders Jim Keenan and Sean Burke did a survey of 524 sales pros at KiteDesk and A Sales Guy Consulting.

The survey didn’t have definitive results to show why.

But there is some speculation.

It may be because Twitter’s so much easier to use than LinkedIn.

For example, if you want to get updates from a certain person, they think they have to be connected to that person (Although that technically isn’t true…you can follow people.)

You can also search exactly for what people are talking about with Twitter’s hashtags. There’s no similar function on LinkedIn.

It’s also possible to learn so much more about your prospects because Twitter lets you see who they follow, who follows them, what they retweet, and what their lists are.

The atmosphere is so casual and informal with Twitter that it’s far easier to get in front of a Fortune 500 CEO.

Great Sales People Don’t Meet B2B Buyers Where They Are!

They meet them where they’re going to be. B2B buyers complete 75% of their purchasing process before they even consider speaking to a salesperson.

That means you need to have your sales cycle completely mapped out. You must have content ready to deliver to your prospects to meet them where they’re at now, and to help them move to the next stage in the process.

And while Twitter is a great platform for meeting and developing connections, you must take your relationship offline to close deals.

Oh, and remember those 524 survey respondents?

Nearly 3/4 of them who beat their 2014 quota by 10% or greater said they were “highly effective” or “better than most” at selling with social media. 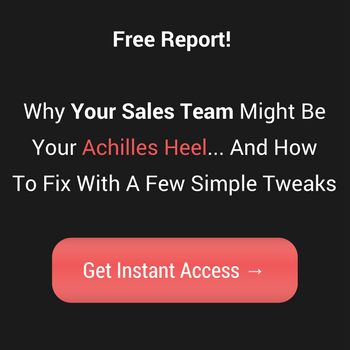